In this post we are going to be talking about different tail shapes and how they ride in the water. The shape of the tail can drastically alter the way a board feels and it is important to know the characteristics of each type of tail. There is a good bit of hydrodynamic information about why these different tails work, but as the rider we are really mostly concerned with what that translates to in the water. Stated differently, how does this tail feel on a wave? 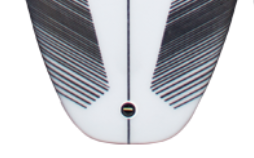 This is the bread and butter tail, a great tail for beginners, as well as intermediates, and experts. This is what most would consider an all-arounders tail, meaning it works well in just about anything. The squash tail is going to have a good balance of speed down the line, fluid rail turns, and release above the lip. It has a very consistent feel, and is a great option for surfers looking to dial in the basics as well as start to progress into more advanced maneuvers. Because it is so versatile, it provides a great platform for surfers to dial in their abilities and rely on the consistency of the squash tail. 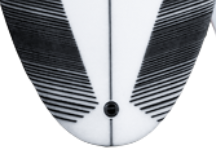 The round tail has the most hold and consistency out of all the tail options. Because there are no sharp changes in the rail line, water sticks to the board all the way through the back. What this does is give the board a great amount of hold. Round tails are known for feeling smooth and their sweet spot is on rail or in the tube when the waves are solid. This is a speed controlling tail. Meaning that, on its own, it does not generate as much speed as the other tail shapes mentioned in this blog. However, it handles speed that is gained from surfing solid waves better than most other tails. If you follow the world tour, you will notice at all of the point breaks the majority of surfers are using a round tail. These waves are slopey, solid, and require a large amount of rail work and the usual tube. 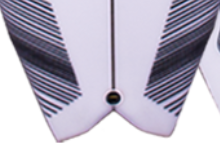 This tail is typically used in hybrid performance shortboards to give an element of excitement. When you think of a swallow tail, think speed and release. The sharp edges on the outside of the tail prevent water from sticking, so it releases at the tips of the tail which provides down the line drive. That same feature, when applied to maneuvers, gives the board what we call release. Since water is not sticking around the whole tail, the tail will want to leave the water when performing top turns, and will want to slide at the end of rail turns(when your weight shifts to your front foot). This tail also loves airs. Both the speed and release that the swallow has is a perfect recipe for punting. Where the round tail is a consistent, serious tail; the swallow tail lightens the mood with an exciting, playful feeling.

The bat tail is an interesting one. If you draw a line from tip to tip around the tail, you will notice the line is the shape of a round tail. So, the bat tail is actually going to feel similar to a round tail with a few slight differences. The first is speed, since the tail has sharp edges and is wider, this is going to increase the speed and drive on a board with this tail. The second is release(just like the swallow tail), since the bat tail has sharp edges water is going to easily detach from the tail which translates to an increased willingness of the tail to leave the water when performing maneuvers on a section. Despite its funky shape, this is a pretty solid all-around tail. It feels great down the line, on rail, and above the lip. 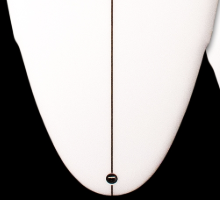 The wing is a feature that can be incorporated with any tail shape. The concept is pretty simple, yet quite effective. Earlier in the blog we mentioned several times how sharp edges serve as a breaking point where water detaches from the board, which loosens up the tail. Well, that is exactly what the wing does. Everything below the wing is not gripped by the water while you are surfing. This allows the surfer to execute sharper turns with ease. You see this feature commonly used on boards with wide tails as a way to increase maneuverability on a tail that typically is not as agile.