Who - El Patron is a board specifically designed for the older, heavier folks that want to surf a proper shortboard but still feel confident when paddling for waves. This board is for those that feel they have been forced to ride hybrid, fishy type boards due to a combination of high crowds, getting older, and gaining some undesired pounds.

When - El Patron is suited for just about everything except grovel conditions. This board can easily be your daily driver as it works well in all kinds of conditions and sizes from stomach/chest high to well overhead.

What - El Patron is Biolos’s personal favorite. A board that was designed by him, for him, and all others like him. It is a conventional shortboard that has been designed with the Average Joe in mind. Despite who this board was meant for, it was actually based off a quiver of higher volume(wider and thicker) boards for Kolohe. With the idea being that they still maneuver like a thinner board. Starting with the nose, we have a low entry rocker with a slightly wider and thicker feel than a traditional nose. This is going to give the board that paddle power to get in early. Moving through the middle we have a traditional short board curvature with a bit extra width and thicker rails. This give El Patron stability and the ability to generate more speed as well as plane through the occasional soft spot. Down to the tail, we, again, have a rather traditional transition into a squash or round tail(depending on your preference) with thinner boxy rails to promote control but also some looseness when desired. All in all, this board appears to look pretty similar to a regular shortboard. However, the magic of El Patron board comes in two additional parts. The first being the rocker; there is zero rocker in the nose and tail and the most minimal single concave through the middle. What does this do? Well it allows such a thick, high volume board to sit lower in the water and let the rails engage and transition with ease. Part two involves the stringer. Because this model comes so thick, they shaved 1/3 off the stringer making it a 2 ply instead of the traditional 3 ply. This gives El Patron the flex pattern of a thin Proformance board; since it is so thick, this reduction in the stringer as little to no impact on the breaking point. 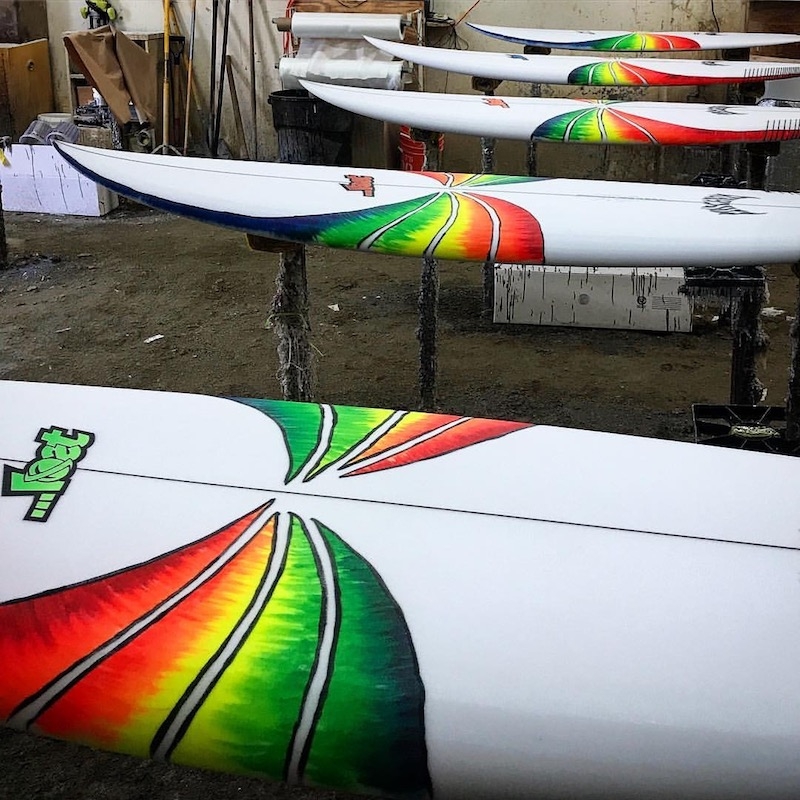